The store will not work correctly in the case when cookies are disabled.

We use cookies to make your experience better.To comply with the new e-Privacy directive, we need to ask for your consent to set the cookies.Further Cookie information can be found in our Privacy Notice in the site footer.
Menu
Account
Settings
Language
United States

Skip to the end of the images gallery 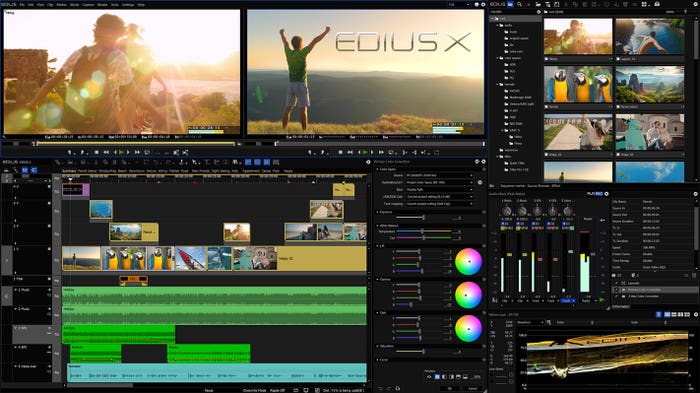 Skip to the beginning of the images gallery

What is EDIUS X?

EDIUS X marks the start into a new era of nonlinear editing. EDIUS X comes with a completely redesigned core engine along with a modular concept allowing even more performance for fully customizable workflows.

For about two decades EDIUS is well known for its stability, benchmark setting performance, and creative tools. EDIUS is being used across the industry from broadcast facilities and news agencies up to government institutions, corporate productions, independent film makers, video creators and video enthusiasts.

EDIUS is video editing software that was developed in Japan

Since version 1 was released in 2003, we have aggressively upgraded it numerous times, and it is now used in many video production facilities. The strengths of EDIUS include its incredible nimbleness and flexibility. With a focus on multiformat real-time mixed editing at full resolution and frame rate, we have realized a speedy workflow and expressiveness through diverse effects. Moreover, even higher performance can be realized and unique environments for individual users can be created when used in combination with hardware developed by our company. From personal projects to editing movies for theatrical release that require high quality, EDIUS will continue to develop along with new video creation possibilities in the future.

4K HDR can be played and edited quickly as native data

A variety of video sources have come into use. These include full high-definition video that can be easily captured with digital cameras, smartphones or other portable devices, and UHD video from 4K video cameras, which have begun to increase in availability even for consumer use, as well as 4K, 2K, 3D and 10-bit recordings for professional video. We have optimized the EDIUS engine, which we developed ourselves, for Intel Core i processors in order to edit video sources including 4K, which has become the standard for the next generation of video. EDIUS provides a comfortable real-time editing environment for native data (video files as recorded) without requiring conversion to intermediate codecs for editing work. EDIUS can support every kind of work environment according to its production flow, including news that must be edited in short amounts of time, film that requires high-quality video production and post-production of commercials. EDIUS supports the intense workflows of the next generation of professional video production workplaces and can be used to build satisfying video production environments.

All EDIUS development is conducted in Japan. Sony, Panasonic, Canon, Nikon, JVC Kenwood and other Japanese manufacturers hold significant shares of the video camera market for both consumer and professional products. Taking advantage of undertaking development in Japan, we work in close cooperation with these camera makers from the development stage so that we can include new codecs as quickly as possible in EDIUS. As a result, we are able to support a wide range of products from consumer devices to professional video and cinema cameras in a timely manner in EDIUS. We are also able to support numerous log color spaces utilized in HDR editing. Of course, loading native formats without conversion to intermediary codecs and quick, stress-free editing are also possible.

Powerful multi-camera editing that enables the mixture of multiple codecs

Since its first version, EDIUS has taken the lead in supporting mixed editing of multiple formats. Even with multi-camera editing that allows switching of up to 16 cameras, you can continue editing in native formats with multiple codecs on the same timeline. Taking advantage of being a 64-bit native application, EDIUS can use large amounts of memory in excess of 8GB and set vertical and horizontal aspect ratios freely. Not restricted to TV, film and other common frame sizes, EDIUS also supports editing of long and wide video images that are used for digital signage and event videos. From 24×24 pixels to 4K×2K, videos of different sizes can be mixed on the same timeline and processed in real time. Monitoring can also be adapted to the resolution of the monitor display and set to show everything. This allows it to provide an editing workflow unrestricted by resolution, endowing it with flexibility that enables support of all types of video production.

The marquee feature of EDIUS is real-time editing that maximizes use of CPU power and is superior to competitor offerings. EDIUS has been further optimized for the latest CPU architectures, represented by the Intel Core i processors. In addition to the distributed processing of multiple decoding processes, it takes full advantage of Intel Quick Sync Video hardware acceleration. Products made by other companies only use this acceleration during encoding. EDIUS, however, also uses it when decoding during playback, so even when working on compact computers and laptops that lack sufficient processing power, native editing of, for example, highly-compressed 4K 30p/24p H.264 files is possible. Moreover, since CPU extensions (AVX2 and FMA3) are supported, the high processing speed required for demanding video editing work is achieved to the greatest extent possible. Since decoding is always conducted at full resolution and frame rate, rendering is not necessary for previewing and high-quality editing conditions are maintained constantly.

Windows 10 64-bit version 1903 or later
Changes can be made at any time without notice.